My Secret to Hypnotic Writing 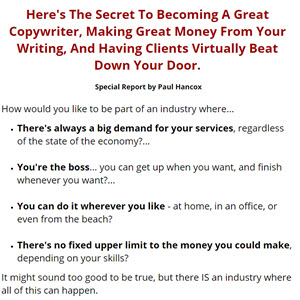 Imagine someone hands you the following message:

You wouldn't be too interested in it, would you? It would look strange. Confusing. You might assume it's from another language, but unless you knew Italian, you would only be guessing the language and the message.

What would you do? Obviously, you would need to translate the message.

How? In this case, you might just go online at a great web site for translating languages, enter the above text, and quickly discover that those words in Italian actually mean:

"I'm about to tell you my million-dollar secret for writing sales copy. This is something I've never told anyone else in the entire world. I'll tell you right now, if you promise to keep this a secret. Agreed?"

Ah! Now it all makes sense! Now you know what the words mean and you are free to enjoy them, act on them, or just dismiss them. But at least now you've gotten the communication. Relax. Breathe. Smile. Ahhhhhh . . .

But what does all this translation business have to do with how I write hypnotic sales letters, ads, and news releases?

In a nutshell, translating is exactly what I do in writing sales copy. When someone hands me a technical manual on a new software program—with the idea they want me to write a sales letter for the software—what I do is translate that manual.

In short, I do the same thing the language translation web site does. I simply look at what the manual says the software does, and then I translate it into benefits that make sense to you, the consumer. In a way, the manual is written for techies, much like Italian is written for Italians. I have to translate both so you can understand and make sense of them. If I don't, you won't care.

Here's an example of what I mean:

Recently I was hired to rewrite a brochure. My client handed me their draft. It read well. There were lines such as, "When was the last time you felt okay?" Well, nothing wrong with that. It works. But I found a way to translate it into something more meaningful, understandable, and emotional. And I did it with just one word. I wrote, "When was the last time you felt fantastic?"

But maybe that example is too simple.

At another point in their brochure they were trying to explain the concept of suppressing emotions and how suppression could be harmful. Their words were fine, just as Italian words are fine. But they didn't communicate in a way most people would hear. So I translated their words to,

"Suppression is building bombs. When you bury an emotion, you bury it alive."

See the difference? I do this with all my copywriting. I take what I'm handed and translate it into benefits, clear language, and bottom line emotion. This truly does feel like translating languages to me. And like learning any new language, it takes time to master.

I take the copy given to me, turn on the part of my mind that knows how to speak copywriting, and I translate the words in front of me into words you can understand.

I also do this copywriting translation with news releases. For example, last month I was hired to write a news release for a woman's book. I could have written a headline that said, "New Book Explains How to Communicate Better," which is what the book is about. But that's Italian. It doesn't speak in emotional terms or in a way most editors want to hear.

After doing some research and learning more about the author, I translated the headline to instead read, "Female Pentagon Advisor Reveals Tips to Success." The latter is far more intriguing. All I did was translate her book into news. I took it from Italian to English. I took it from English to Emotion. I took it from words to power.

What's the secret to being a good "copy translator"?

I could probably quote a relevant line from any number of books on marketing. But I'll grab one from a 1965 book I just received today. It's by Robert Conklin. The title is The Power of a Magnetic Personality. He wrote: "Putting it simply, it means this: Every time you state a fact, describe how that fact will benefit the other person."

There you have it. It's what I've been saying for years: "Get out of your ego and into your reader's ego." Translate what you want to say into simple words and concepts that make sense to your readers.

I hope I've done that with this brief chapter. I began with the idea to tell you how I write sales copy. But I didn't want to just say, "I translate all words into sales copy," which may or may not make sense to you. Instead, I wanted to describe, with examples, what I do so you truly comprehend it. Finally!

Translation: "Now that you know my secret, go forth and translate your sales letters, advertisements, and news releases into ones that will make you millions of dollars. Enjoy!"

This audio and guide will help you know everything about How To Profit Wildly In The Direct Mail Industry.